Historic Places in Pennsylvania to Visit

You will not regret adding these historical sites in Pennsylvania to your must-visit list!

Learn more about each of the historic houses, places, museums, and sites to visit below!

The Best Historic Places to Visit in Pennsylvania

Independence Hall a Georgian style building was built it 1732 and is known as the birthplace of America due to the Declaration of Independence and U.S. Constitution being both debated and signed inside this building.  It was originally built to be the Pennsylvania State House and once housed all three branches of Pennsylvania’s colonial government.

Independence Hall visitors will be able to see the Assembly Room (where the Declaration of Independence and the U.S. Constitution were both signed) on the first floor of the building. It is open daily from 9-5.

There is no record of when or why the Liberty Bell cracked, but most believe that a split developed in the early 1840s after almost 100 years of being heavily used. Learn more about the history of the Liberty Bell on a self-guided tour that is open daily 9am to 5pm.

Fallingwater is a one-of-a kind modern house designed by architect Frank Lloyd Wright in 1935. It is located in the mountains of southwest Pennsylvania’s Laurel Highlands which is about an hour and a half from Pittsburgh.

It was built for the Kauffman family and was used as a weekend house by the family until 1963. It was then donated to the Western Pennsylvania Conservancy along with the surrounding 469 acres. Not only that it now operates as a museum and holds regular tours which showcases a moment froze in time.

This museum is dedicated to Gettysburg’s only civilian casualty Jennie Wade. Jennie was struck by a stray bullet on July 3rd, 1863 at the age of 20 while making bread for Union soldiers in her sisters home and died instantly.

Artifacts from that fatal day in 1863 are on display at the museum, including the artillery shell that punctured the roof of the house and a floorboard with Jennie’s blood still on it.

Visit Valley Forge National Historical Park 365 days a year. A first-time visit to park is best experienced by driving in a vehicle.

The self-guided driving route can take up to 3 hours to complete, depending on how often you stop and how much time you spend at each of the 10 stop locations. The Encampment Tour route includes some of the most scenic views of the park as well as many of the historic sites and monuments.

The USS Requin is a submarine museum located in Pittsburgh at the Carnegie Science Center. It is open daily Spring through Fall for guided walkthroughs.

Requin holds the honor of being the Navy’s first Radar Picket submarine and was completed in 1945. Over the course of over 25 years it had completed 5,000 dives. Once decommissioned it became a museum to educate the community about life and science on a submarine in the mid 20th century.

Despite being sometimes referred to as Fonthill Castle this home is actually a large concrete house and not a castle. It was built between 1908-1912, and was the home of Henry Chapman Mercer an archaeologist and tile maker.

Fonthill is designated a National Historic Landmark and now serves as a museum to showcase Mercer’s decorative tiles and prints from around the world as well as his own. Tours are available 6 days a week. Photo credit: Mercermuseum.org.

Point State Park a National Historic Landmark is located on a 36 acre parcel at the tip of Pittsburgh where the confluence the Allegheny and Monongahela rivers, form the Ohio River.

The park contains the remains of the two oldest structures in Pittsburgh, Fort Pitt and Fort Duquesne. The location of Fort Duquesne is marked by a granite outline within the Great Lawn. The center of the outline contains a bronze medallion depicting the fort.

It also contains the Fort Pitt Blockhouse which is the oldest architectural landmark in Pittsburgh, and it is also the nation’s only authenticated pre-Revolutionary War structure west of the Allegheny Mountains. Much of its original architecture is intact, including the stone foundation, bricks, and timber elements that are original to its 1764 construction.

I hope you enjoyed all this historic places list of places you can visit in Pennsylvania! Take a second to explore a few more great places to visit below too! 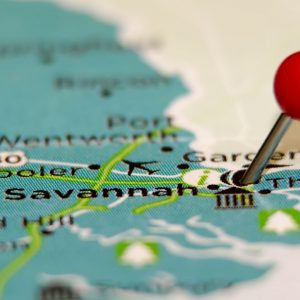 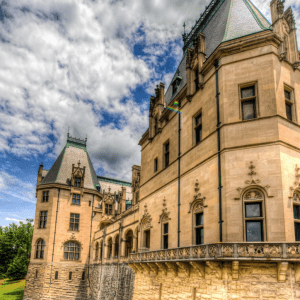 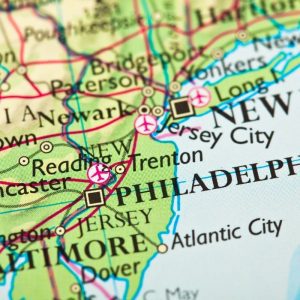 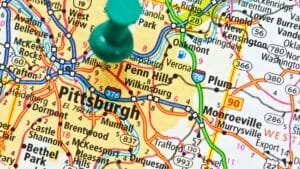 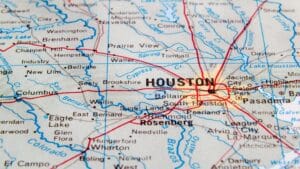